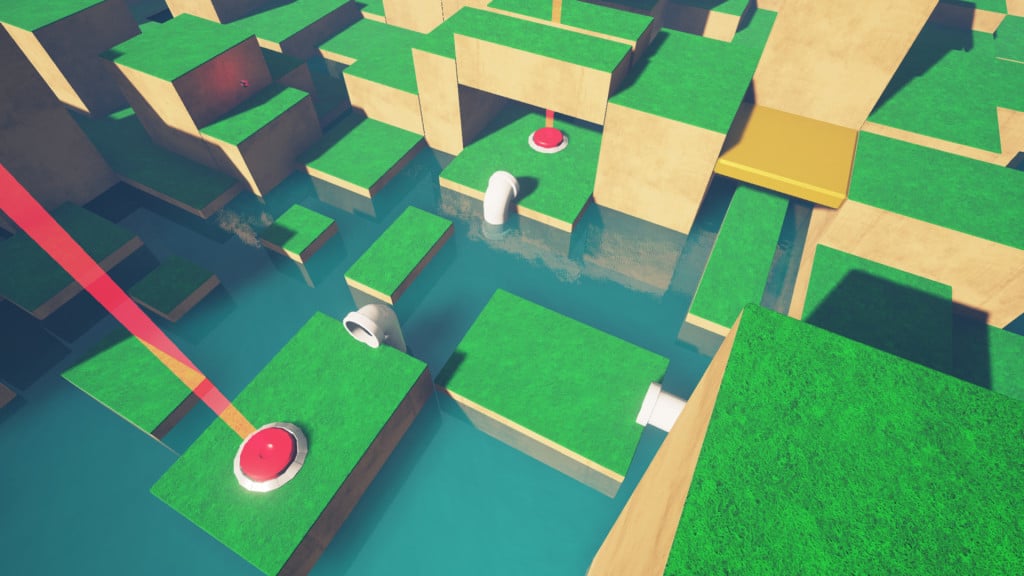 Why It’s Similar: Similar to Mirror’s Edge, Refunct is a first-person parkour-inspired game all about wall-running, climbing, sliding, and taking wild leaps off ledges. Visuals are also strikingly colored, aesthetically aiding you in navigating across the entire map. There are also puzzle elements which require you to keenly observe your surroundings to figure out how to reach the point you need to get to. LIke Mirror’s Edge, Refunct’s at times dizzying heights may make some acrophobes cringe (though it’s great for the rest of us!)

Why It’s Unique: Unlike Mirror’s Edge, Refunct is centered on a “non-violent, open world without death”. So, don’t expect to encounter any baddies or suicidal parkour missteps. The game is also much more soothing, almost therapeutic. Your non-storied task is simply to reach multiple platforms, turning them grassy along the way in your quest to restore colored life to a grey sea-rising city. Refunct is also incredibly short. Most players will be able to complete it in about 20 or 30 minutes.

Overall: Although very brief, Refunct does what it sets out to do incredibly well – basically, give you a chilled-out parkour experience with basic platform puzzle-solving. There’s nothing too revolutionary here, but what’s included is definitely worth the low entry price. Refunct definitely holds strong among other parkour video games like Mirror’s Edge listed here.

You may also wish to check out Refunct’s free-to-play spiritual prequel, Refunktion, made by the same developer. This parkour game is very visually akin to Mirror’s Edge and, unlike Refunct, contains fairly challenging stealth elements.

7. Brink…. or a possible alternative? 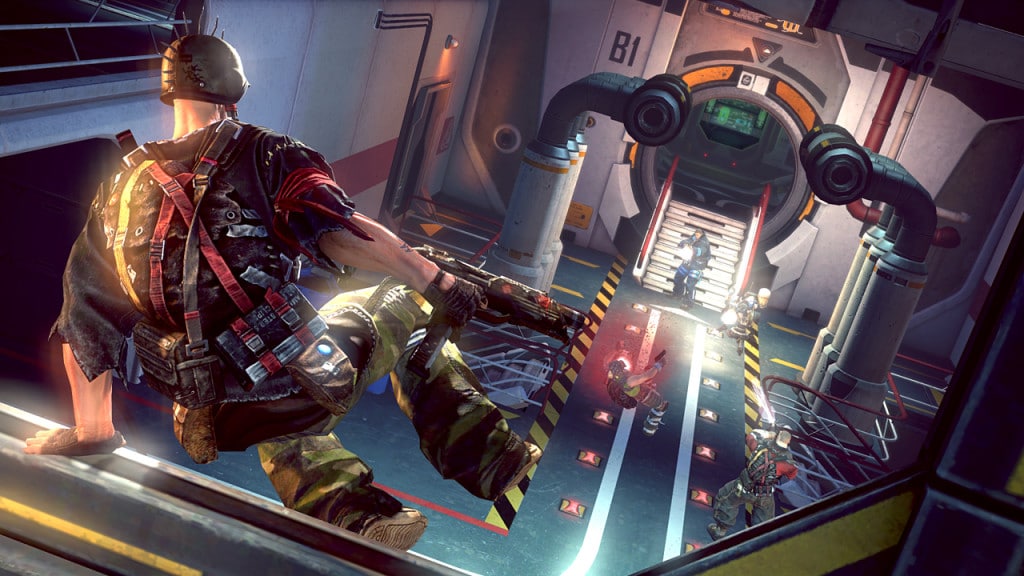 Why It’s Similar: Like Mirror’s Edge, Brink heavily marketed itself as a parkour-infused game with tons of fluid physical-environmental traversals (i.e. called SMART, or Smooth Movement Across Random Terrain). You’ll be seamlessly criss-crossing stages with leaps, ledge-pulls, slides, and more with incredible ease and momentum. Brink is also played from the first-person perspective, much like Mirror’s Edge.

Why It’s Unique: While Mirror’s Edge is primarily a ‘parkour game with some combat elements’, Brink is mostly about ‘online competitive combat, with some parkour elements’ put in. Parkour moves are also far more automated than Mirror’s Edge and can be carried out by simply holding down the SMART button (kinda like dashing / climbing in Assassin’s Creed). There are also distinct character classes (Soldiers, Engineers, Medics, Operatives) that marginally affect playstyle, though each is able to carry out similar parkour moves.

Overall: For its time of release, Brink was considered innovative for being a unique hybrid of first-person shooting and parkour action. However, limited maps, repetitive gameplay, and an overall weak storyline make this game somewhat mediocre (though there are still loyal fans who would disagree). Overall, Brink will still pique the interest of those specifically looking for more games like Mirror’s Edge that feature prominent parkour elements.

Ultimately, if you’re specifically looking for an online first-person shooter / parkour hybrid, we recommend checking out Titanfall instead. Like Brink, Titanfall is focused on intense multiplayer combat with tons of parkour action (e.g. getting from Point A to B in the shortest amount of time, wall-running, ledge climbing, etc.). However, Titanfall is, in our opinion, the far superior game of the two thanks to its incredibly fast-paced action, balanced mechanics, and overall higher production values. Keep in mind though that the parkour action is much more over-the-top than Mirror’s Edge, featuring ‘double jump’ jetpacks, gravity-defying wall-runs, and yes, juggernaut mechs! So, it isn’t ‘pure parkour’ in the strictest sense. Still, players wanting more games like Mirror’s Edge will find something to like here, despite its varied genre. Titanfall is also on steep discount at the moment across all platforms. 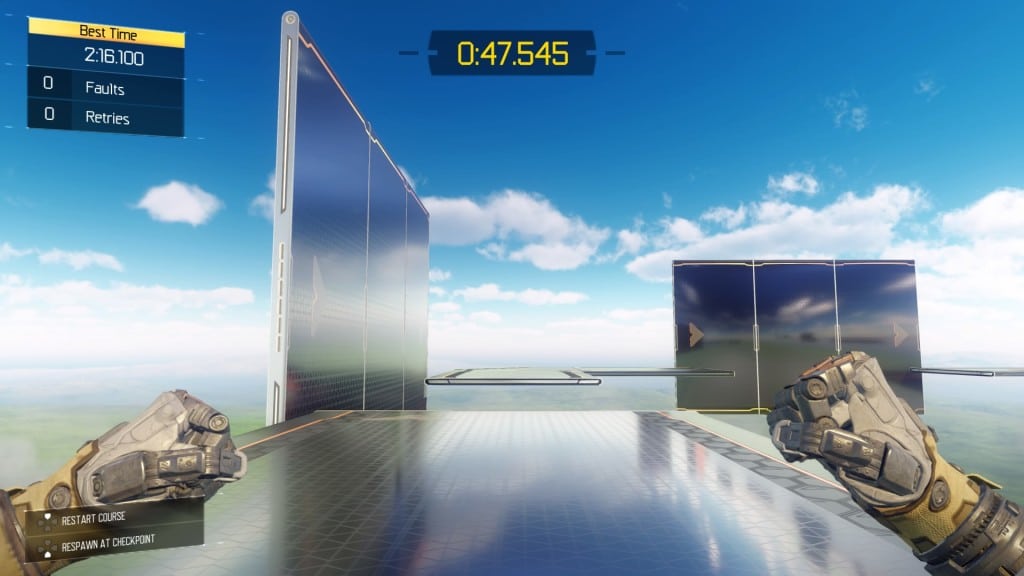 Why It’s Similar: We were tempted to group this together with Brink and Titanfall. However, we figured Call Of Duty: Black Ops III’s Free Run mode deserved its own mention here given its unique affinity with Mirror’s Edge’s Time Trial challenges (particularly the DLC). Like Mirror’s Edge’s DLC, you’ll be doing plenty of first-person wall-running, ledge-climbing, and other momentum-driven parkour moves across strange floating platforms. True to parkour’s core philosophy, efficiency is key as you try to shave off precious seconds from your runs using environmental shortcuts and properly timed moves.

Why It’s Unique: Call Of Duty: Black Ops III Free Run Mode uniquely combines the most addictive elements of Mirror’s Edge and Titanfall into one fun package. There’s a huge sense of ‘flow’ from smoothly chaining together your Mirror’s Edge-esque jumps-and-slides with Titanfall-ish double-jumps and long wall-run stretches. The mode also equips you with weapons, challenging you to hit floating targets as you parkour from start to finish. You’ll also need to keep a close eye on your boost meter. Needless to say, multitasking is key if you hope to break any online World Records.

Overall: Free Run mode comes already unlocked with the rest of the main CoD:BO3 content. Both distinct and familiar, this ‘mini game’ of sorts is easy to pick up yet difficult to master. A definite must-try for players particularly keen on parkour video games like Mirror’s Edge that are all about timed perfection. 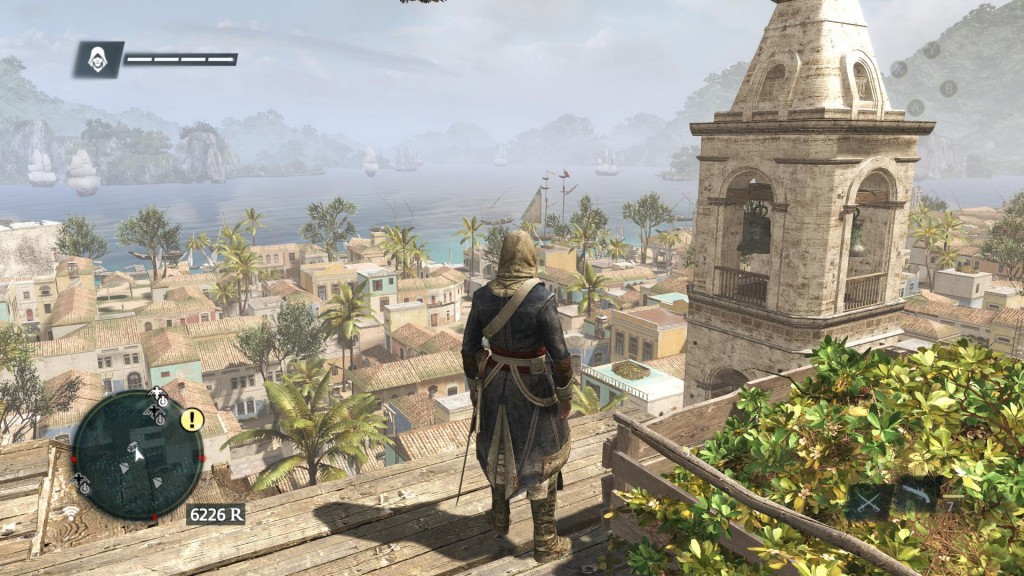 Why They’re Similar: Assassin’s Creed is probably the most often mentioned series in online discussions on parkour video games like Mirror’s Edge. Like Mirror’s Edge, you’ll be doing plenty of rooftop dashes and acrobatic vaulting, chasing and running away from baddies along the way. The series also empowers you with an incredible sense of vertical and horizontal fluidity of movement. Additionally, both Mirror’s Edge and the Assassin’s Creed series – while slightly exaggerated in their physics – do try to maintain a much closer grounding to traversal reality compared to, say, the tech-equipped movement of Titanfall or Black Ops’ Free Run mode.

Why They’re Unique: Parkour in the Assassin’s Creed series is far ‘stickier’ than Mirror’s Edge. The games are much more lenient with timed moves, often assisting you with reaching ledges and running across narrow planks with a much smaller fear of falling (it still happens though). Unlike Mirror’s Edge, parkour movement is heavily (but not entirely) automated by holding down the run button. There’s also a stronger emphasis on melee combat and stealth. The series also maintains a prevailingly third-person perspective (save for a few non-parkour sections in more recent games) set in open-world environments.

Overall: Assassin’s Creed games are rather hit-and-miss. We personally loved Black Flag and Syndicate’s overall polish, though earlier titles tended to be more squarely focused on the original parkour premise. All in all, this series is bound to please most players searching for alternative parkour video games to Mirror’s Edge. Advice: You may want to hold off on Assassin’s Creed III: Liberation and Assassin’s Creed: Unity, which tend to receive more average reviews compared to the more widespread critical acclaim of the rest. 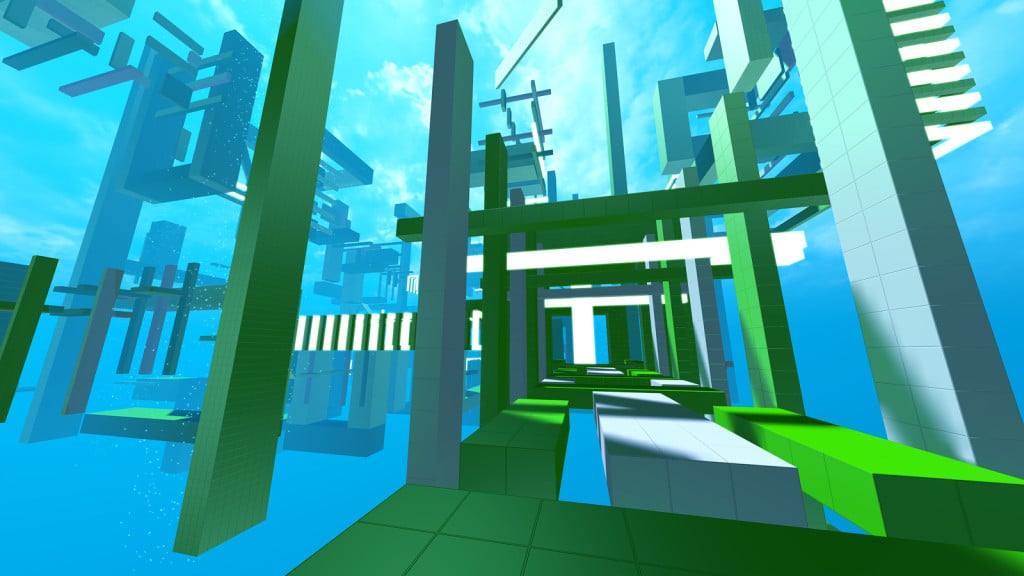 Why It’s Similar: Inevitable comparisons have been made between inMomentum and Mirror’s Edge. Like Mirror’s Edge, inMomentum is all about, well… being in momentum! You’ll be dashing, jumping, and vaulting across clean, brightly-colored stages that are aesthetically reminiscent of Mirror’s Edge, particularly the DLC pack. Both soundtracks are also made up mostly of ambient electronic music, which enhance the overall immersion. inMomentum also has a main Time Trial mode that challenges you to dash and leap you way across narrow ledges using shortcuts.

Why It’s Unique: As its name suggests, inMomentum is much faster paced than Mirror’s Edge. Gravity is also far more lenient with a greater degree of ‘air control’. You’ll often find yourself bouncing up to ridiculous heights purely from your gathered momentum. The game also adds a few gameplay features, including orb collection, target shooting, and checkpoints (depending on the mode you select). Jumping is by far the main (but not the only) move of the game, unlike Mirror’s Edge more balanced parkour skill set. inMomentum is also a pure parkour platformer without any Story Mode.

Overall: inMomentum is one of those parkour video games like Mirror’s Edge that’s great to play in small dosages. It’s a breeze to pick up but a true challenge to master. However, the game’s online multiplayer mode is a bit of a graveyard. Overall, inMomentum does not break any new ground but still manages to give you an incredible sense of fluid movement with plenty of flexible-physics parkour action. Definitely worth checking out.

Honorable Mentions (More Games Like Mirror’s Edge… With Some Twists)

inFAMOUS series / Prototype series / Sunset Overdrive : All excellent games, though the base parkour mechanics are heavily supplemented with over-the-top superpowers (e.g. Second Son’s Neon powers, etc.). Might not appeal to parkour-purists but others less fussy will definitely enjoy the rapid city-traversing physical movements seen in these titles. You may also want to check out CloudBuilt for some extreme wall-running action with a strong sci-fi twist (not parkour per se). Hover is also worth looking into.

Warframe : This game now touts a revamped parkour traversal system that has mostly gone down well with fans. Wall-running is especially important. The way Warframe implements its parkour mechanics is much different from Mirror’s Edge. Warframe is most suited for those keen on fast-paced online multiplayer action. Combining sleek parkour moves with a well-executed melee kill is especially satisfying!

Sleeping Dogs : Unlike other games like Mirror’s Edge, Sleeping Dogs is more of a straight-up open-world action game akin to GTA (with less guns). Still, parkour does feature prominently in some sections, particularly during chase scenes where you’ll do plenty of running, vaulting, and climbing. Timing your moves also affects your momentum. Again, it’s not a full-on parkour video game but deserves an honourable mention nonetheless.

Did I miss out any more games like Mirror’s Edge? Feel free to share your suggestions in the comments section below and I’ll make sure to add them to the list!