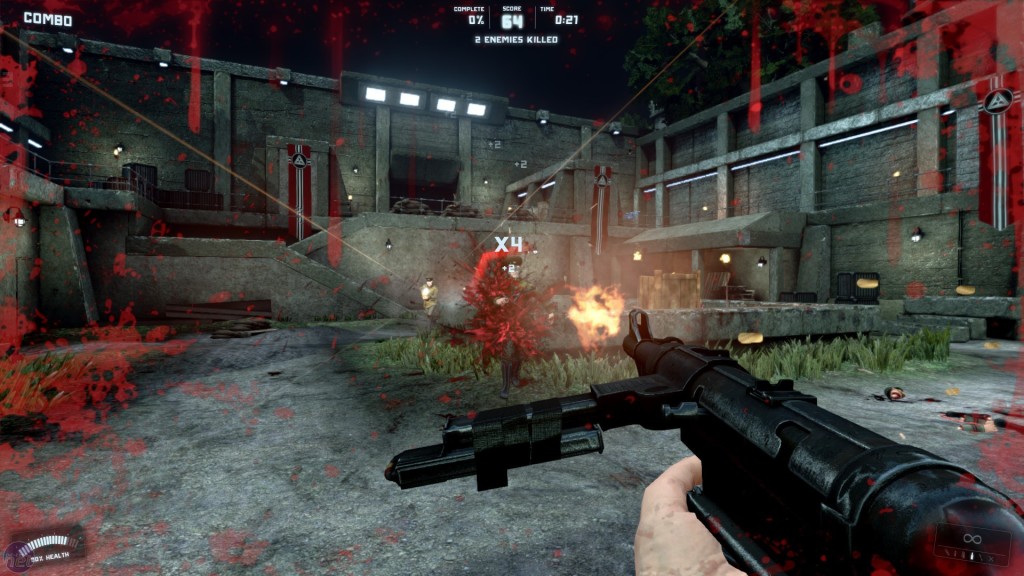 Why it’s similar: A lot of the more tongue-in-cheek elements from Doom can be found in this reboot of a FPS cult classic. For starters, the premise of the game is hilariously goofy (i.e. a wayward monastery threatens to destroy Los Angeles). So, it’s clear Rise of the Triad doesn’t aim to take itself too seriously, much like most retro FPS classics. Like Doom, there’s an insane number of enemies to kill in each level with tons of crazy weapons to wreak havoc. Rise of the Triad is also very fast-paced with a gratifying dose of bloody carnage. Eye splatters never get old. Fun fact: Tom Hall, who worked on the first Doom game, was a major influence in the development of the original Rise of the Triad.

Why it’s different: While it was heavily influenced by Doom’s mechanics, Rise of the Triad also has additional RPG aspects where you’ll select between available characters to control, each with their own characteristics. It also features slightly quirkier enemies that will occasionally beg for their life or pretend to be dead before sneaking back up on you; In addition, there’s off-beat items to be collected such as magic mushrooms and pinball power-ups that are intentionally sillier than those in Doom.

Overall: Doom’s legacy is plastered all over Rise of the Triad. So, while this remake is a little rough around the edges, players looking for more retro-style FPS games like Doom with find this charming rebooted classic a joy to blast through, flaws and all.

Read more honest player reviews of Rise of the Triad. 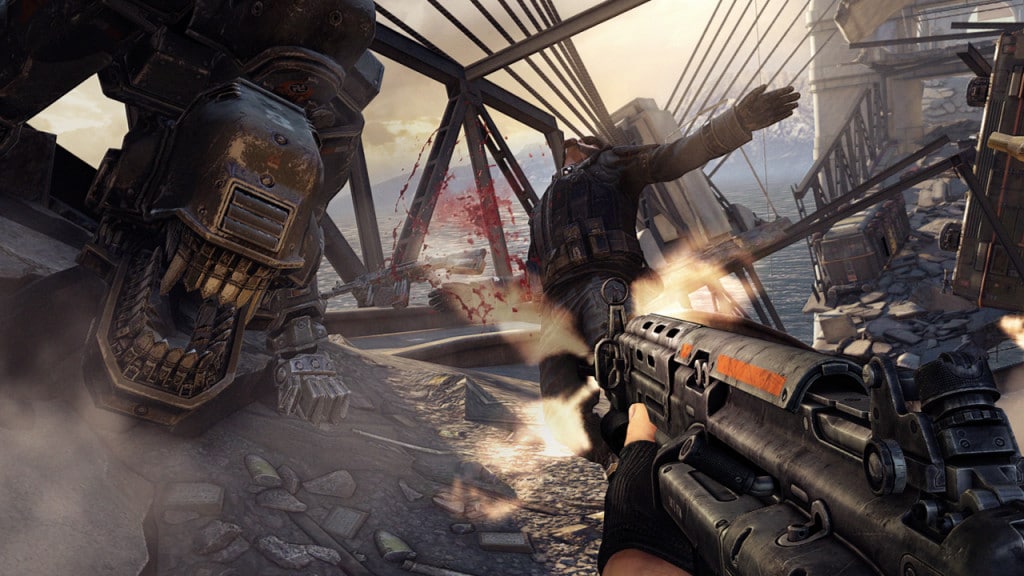 Why it’s similar: This is Wolfenstein back in shining form after the series’ struggles to find its modern footing. Like killing demons in Doom, The New Order / The Old Blood will see you splattering the blood of hundreds of evil Nazis with tons of powerful weapons, often dual wielded. Violence is also abundant here, with a generous amount of very graphic kill scenes. In addition, the story straddles the line between serious and over-the-top, never hesitating to throw giant mechs and robotic hounds your way. Obnoxious bosses will make you want to give them a beating they won’t soon forget.

Why it’s different: Along with its old-skool style, Wolfenstein does a commendable job incorporating many modern FPS elements. For instance, there’s actually a fairly solid cover system in place, and the health mechanic is an effective hybrid of picking up medical supplies coupled with regeneration. Best of all, despite its cheesy premise, the plot in Wolfenstein shows a welcomed amount of emotion and maturity – something you wouldn’t expect in Doom.

Overall: Wolfenstein: The New Order, along with its expansion, are a near-perfect mix of old and new FPS game design. A must-buy for those in search of games like Doom with a little less unthinking run-and-gunning and a bit more nuanced storytelling. 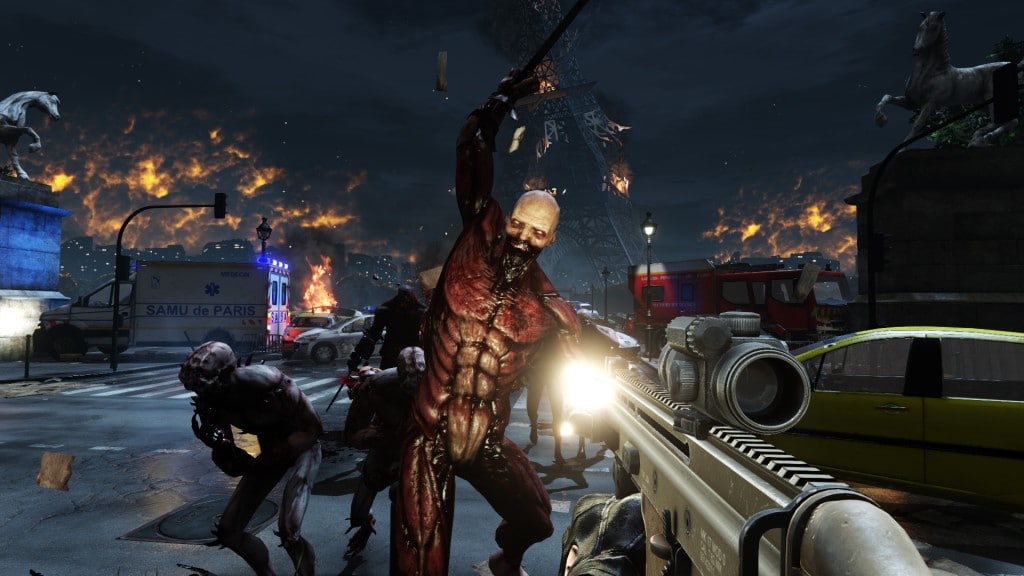 Why it’s similar: Like Doom, Killing Floor 2 pits you against hordes of enemies, this time zombies instead of demons. You’re equipped with a broad arsenal of both melee and projectile weapons. This encourages you to adopt different killing strategies for various foes and boss fights. Similar to Doom, the action is also incredibly fast, furious, and gory. It’s very much straight to the point sans the fluff of most other modern shooters. Additionally, the story, while serviceable, only serves as a skeletal excuse to unleash undead chaos onto you.

Overall: Although slightly varied in approach, IGN’s Vince Ingenito has openly compared Killing Floor 2’s fast-paced “micro-decisions” to the retro FPS elements of games like Doom. This game will most definitely nurse your carnal urge to turn concrete pavements into blood-splattered floors, with bullets to spare. 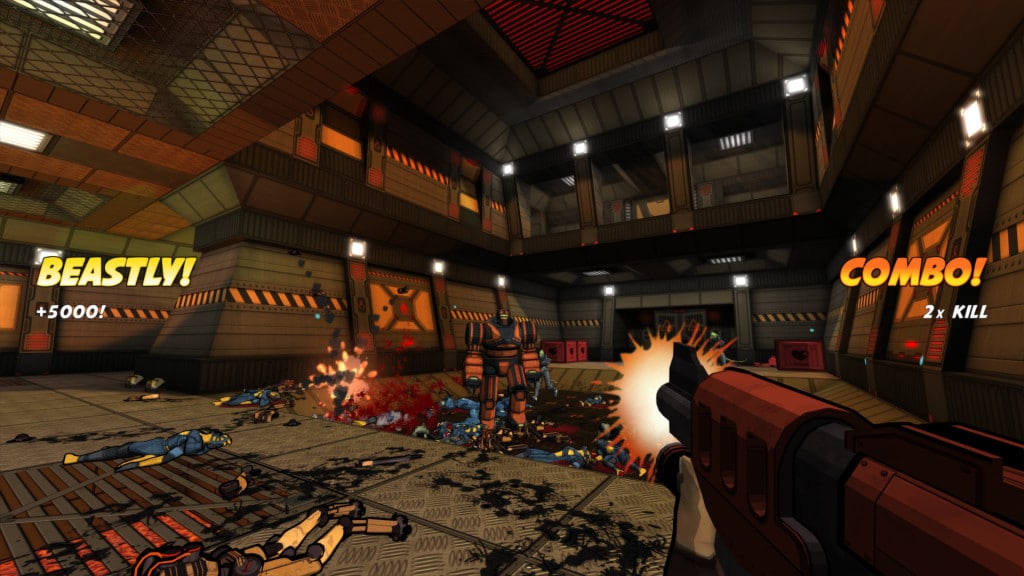 Why it’s similar: Like Doom, Wrack is a true homage to old-skool FPS classics. The game doesn’t bother with many modern-day trappings. There’s no regenerating health, no inventory limits, and lots of loaded stages. In addition, you’ll be spending most of your time speed-killing waves of baddies and flipping switches. Even better, Bobby Price – who composed the music for Doom II, Wolfenstein 3D, Duke Nuken 3D, and Rise of the Triad –  also created the tracks for Wrack.

Why it’s different: Unlike most other games like Doom on this list, Wrack has a limited lives system for each level and there are also some basic puzzles you’ll need to solve to progress through the game. Wrack is also significantly less gory than Doom, opting instead for a more subdued cell-shading art-style more akin to XIII.

Overall: Wrack has received mixed reviews since its release. Nonetheless, most players have applauded the title’s clear influences from old-skool retro FPS games like Doom. Pick this up after you’ve ploughed and murder your way through the other games on this list. 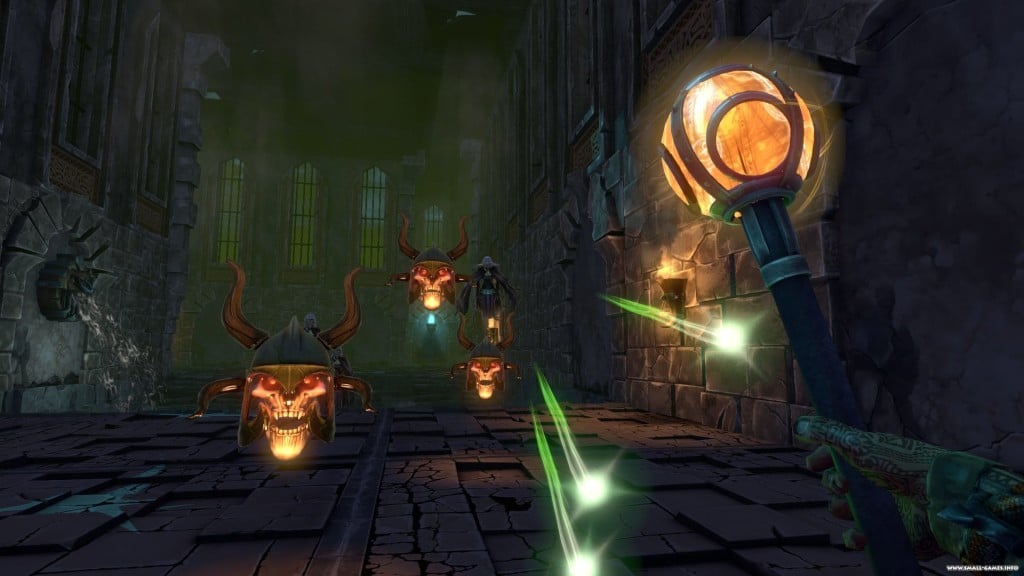 Why it’s similar: Akin to Doom, Ziggurat requires fast-reflexes for you to survive swarms of magical enemies who want nothing more than to kill you. Hey, there are even flying skulls, a la the Lost Souls of Doom! You’ll also be able to use various weapons (i.e. wands) with your classic main and alternate fires, picking up plenty of items along the way without a complicated inventory system. Like Doom, Ziggurat does not take itself too seriously, never hesitating to chuck off-the-wall enemies your way. Mutated garden carrots?! Yes, they’re in there.

Why it’s different: Ziggurat prides itself as “the best combination of First-Person Shooter and Rogue-LITE you’ve ever seen!” This is most definitely the case since the game’s stages are procedurally generated, uniquely playing as both a dungeon crawler and retro shooter. Unlike Doom’s tech and bullet carnage, Ziggurat opts for a more mythic-magical slant. Your character is also far more susceptible to dying. However, this is actually meant to be part of the game’s design since you’re rewarded with new weapons after a certain number of deaths.

Overall: Ziggurat is one of a few games like Doom but with rogue-like elements thrown in, making it distinct in its own right. Worth checking out if you like your FPSs with a steep dungeon challenge.

Honorable Mentions (Other Games Like Doom… With A Twist!)

Similar to Doom, you control a stoic armored marine named Jack. His only aim is to single-handedly inflict pain on outer-space aliens. Ridiculously cheesy in all the right ways! Alien Rage’s gameplay is a little on the modern side, though you’ll be rewarded for particular kill styles much like in the rebooted Doom. Kill counts range in the gleeful thousands.

Turok is a bit more sporadic when it comes to flooding you with enemy swarms. Nonetheless, it is often mentioned alongside Doom and other FPS classics. This remastered version has enhanced gameplay controls and full screen resolution support.

F.E.A.R.  : The original, more than the sequels. This is the game Doom 3 should have been.

Bodycount : Slightly flawed, but has its fast-paced old-skool heart in all the right places.

Far Cry 3: Blood Dragon : Rather different from Doom (i.e. the game has an open-world environment with a good amount of stealth involved). However, Blood Dragon is worth mentioning purely for its retro-drenched style mixed with new-skool FPS gameplay. Also, like Doomguy, you’re a one-man killing machine with a penchant for macho mayhem (e.g. you stab crocodiles, because you can).

Duke Nukem Forever : Critically panned for its failure to smoothly traverse old-skool and new. Still, no list of games like Doom would be complete without at least one mention of our crude & rude, bubblegum-chewin’, wise-crackin’ hero.

Did I miss out any modern retro-style games like Doom? Feel free to leave your comments below and I’ll add them to the list!