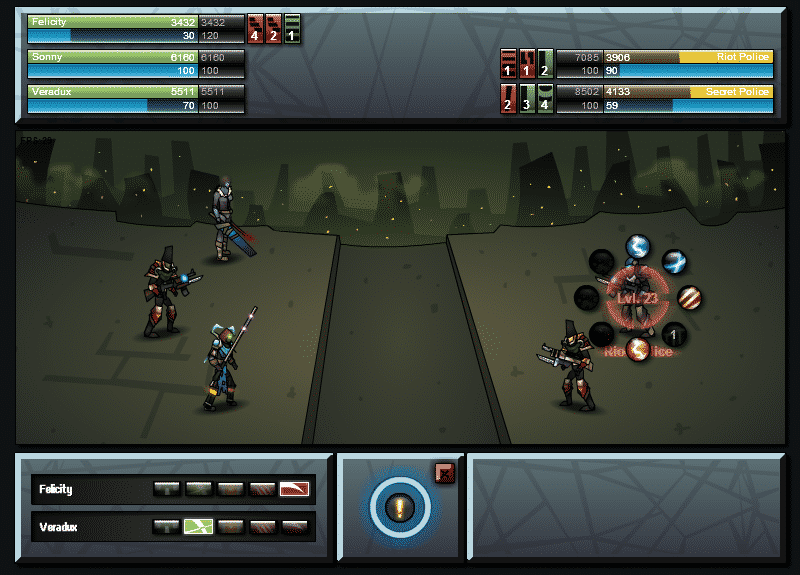 Despite being an older Flash game, Sonny 2 is just as addictive as other games like Darkest Dungeon. You may find the graphics to be a little basic (it’s a Flash game after all). However, Darkest Dungeons fans are quick to point out a similar ‘feel’ between the two titles’ battle systems. Fighting is turn-based, with characters having Ability and Attribute points to spend on upgrades. There’s a whole range of weapons and attack styles, including special physical and mental strikes. Like Darkest Dungeon, you’ll also have to balance hits with defense as you struggle to keep alive against tough baddies.

Sonny 2 may not appeal to those wanting meaty roguelike games like Darkest Dungeon with tons of replay value. However, it’s an ideal quick-fix for anyone keen on thoughtful turn-based strategy. The game is often hailed as one of the greatest Flash titles ever made, with many fans eagerly awaiting the sequel. 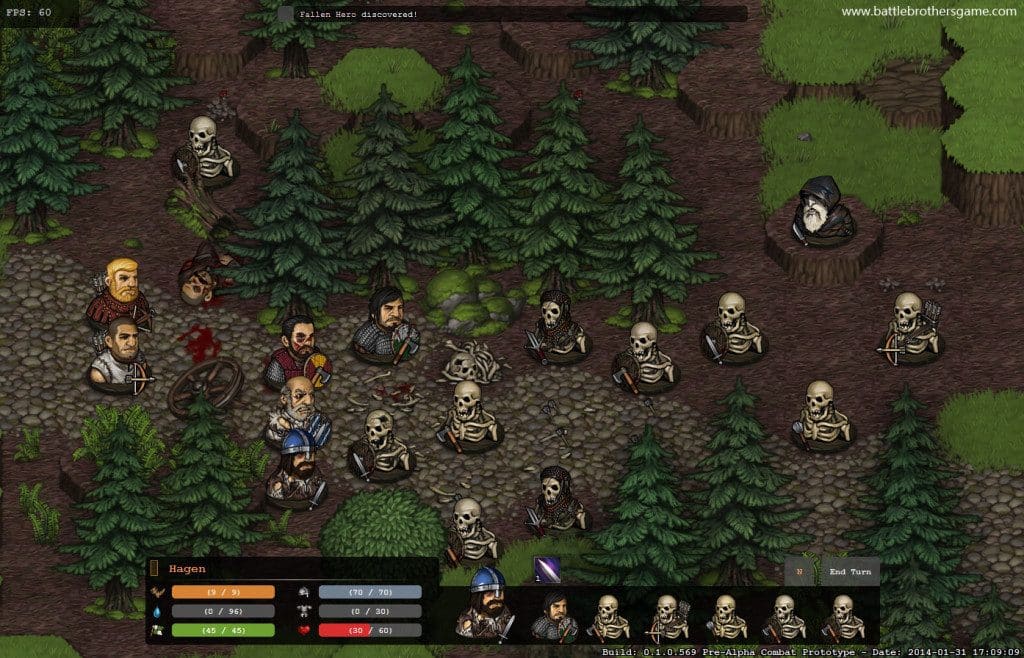 Battle Brothers will appeal if you’re in love with Darkest Dungeons’ squad recruitment mechanics. This turn-based strategy RPG sees you hiring a diverse crew of mercenaries, each with distinct powers and vulnerabilities. Who you decide to bring onboard is entirely up to you. You can also equip different weapons and items as you level up members along flexible class systems.

Similar to many roguelike games like Darkest Dungeon, death in Battle Brothers is mercilessly permanent. Thus, every decision you make is crucial. In addition, most maps and battle scenarios are procedurally generated, ensuring countless hours of replay value. Battle Brothers’ world is moreover filled with rich lore and story-driven events, creating a level of immersion that transcends even that of Darkest Dungeon.

The game has received glowing reviews on Steam, with many claiming it to be a sorely overlooked indie gem. Not to be missed if you’re looking for hard squad-based games like Darkest Dungeon. 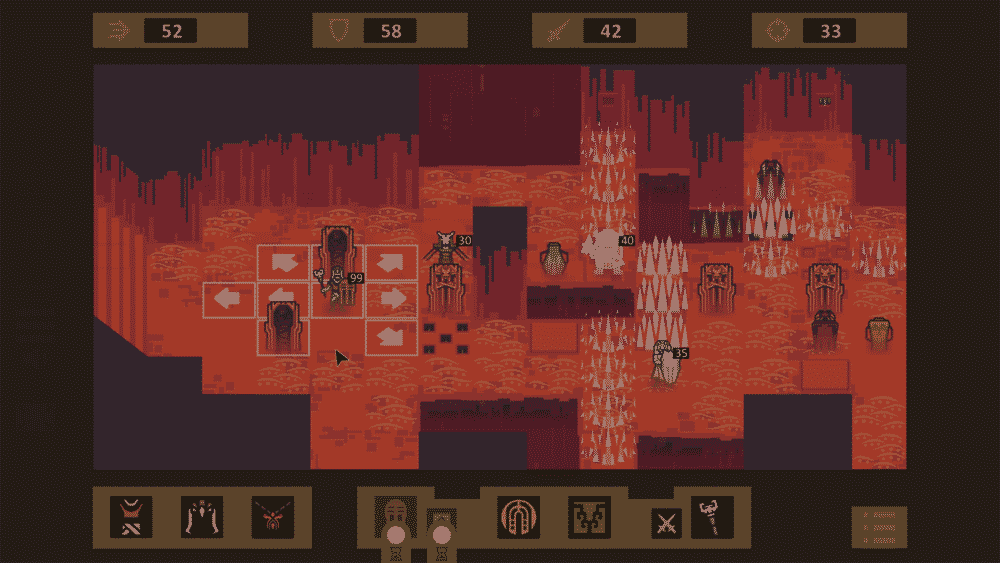 Set in an ancient Egyptian pyramid, Hieroglyphika is a one of a kind roguelike game that tells its story entirely through pictograms, without any text. It differs from Darkest Dungeon in a few key ways. For example, you won’t control an entire hero squad. Instead, you’ll guide a single character throughout your pyramid crawl, playing from a top-down rather than side-scrolling perspective.

However, Hieroglyphika does share quite a lot in common with other games like Darkest Dungeon. This includes turn-based battles, random events, and permadeath. All of these coerce you to plot your actions carefully. You’ll also hunt for loot, upgrading your skills as you face off against varied enemy types.

On the downside, you may find the waiting time during combat to be fairly long due to slow enemy turns. Nonetheless, Hieroglyphika is overall an excellent ‘struggle to survive’ roguelike that’ll please anyone wanting more games like Darkest Dungeon.

Also check out Hack, Slash, Loot and Dungeon Souls for other similar games. 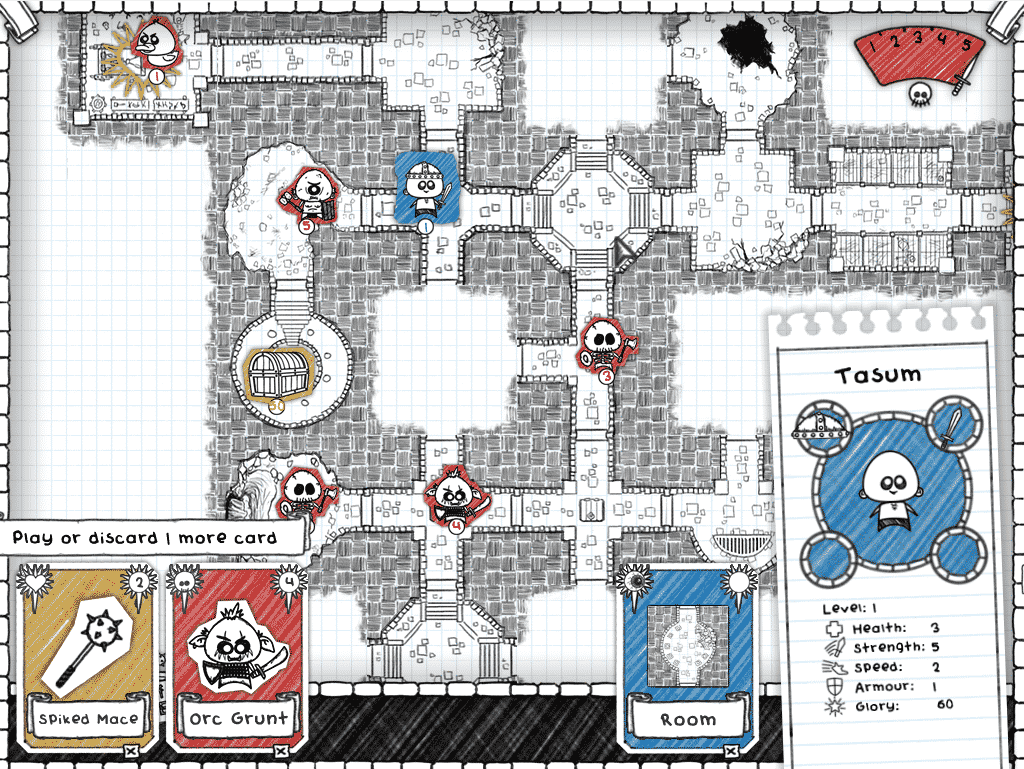 Guild of Dungeoneering does things a little differently from most games like Darkest Dungeon. Instead of moving heroes down corridors, you are tasked with building the dungeons around them. You’ll thus use various cards drawn from decks to lay out rooms, monsters, loots, and traps. Meanwhile, your characters will have the freedom to make their own decisions. The challenge of the game lies with using your coaxing abilities to help them survive the very levels you’ve built around them.

Like Darkest Dungeon, Guild of Dungeoneering lets you upgrade your heroes with skills and perks. Action is also turn-based, though you’ll be focusing mostly on construction rather than direct combat. The game also doesn’t hold back on toughness, posing a challenge to even the most seasoned dungeon-crawlers.

Overall, Guild of Dungeoneering presents a nice strategic twist while still being familiar enough to most games like Darkest Dungeon.

10. Mordheim: City of the Damned 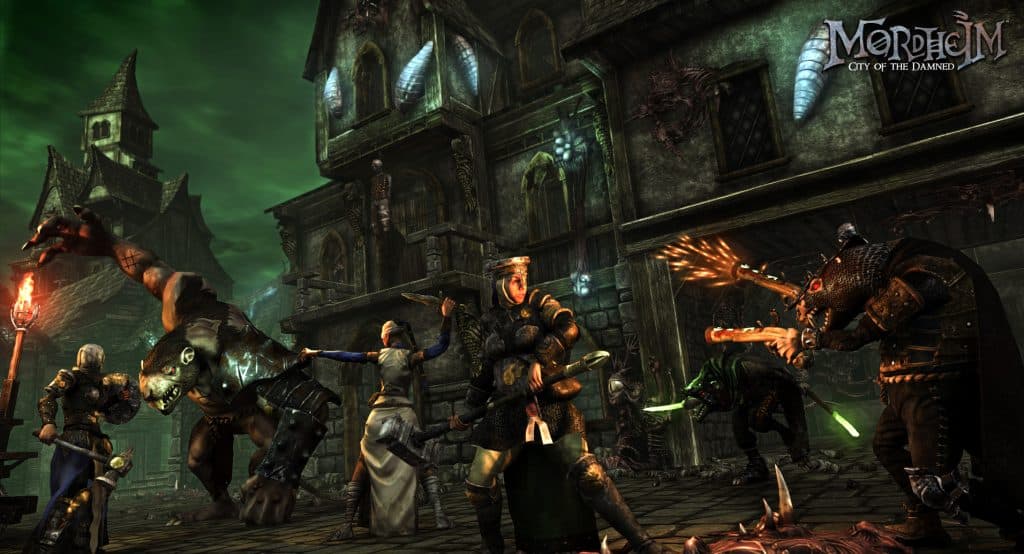 Grounded in the Warhammer universe, Mordheim puts you in control of a team of warriors fighting against powerful foes. You’ll collect Wyrdstone, using it to upgrade your characters with new abilities and skills. Similar to other games like Darkest Dungeon, every choice you make in battle has lasting effects, including permadeath. Combat is also partly based on dice rolls that determine your chances of landing hits or dodging attacks.

As with Darkest Dungeon, Mordheim prides itself in its hardness. You’ll die often, thus forcing you to constantly rethink your strategies. A few players have complained about the game’s over-reliance on dice luck. However, you ought to at least give this Warhammer release a try, if only to experience more games like Darkest Dungeon that don’t hold back on kicking your ass.

Read more honest reviews of Mordheim: City of the Damned.

Honorable Mentions (More Games Like Darkest Dungeon – not necessarily of the same sub-genre but often suggested by fans): 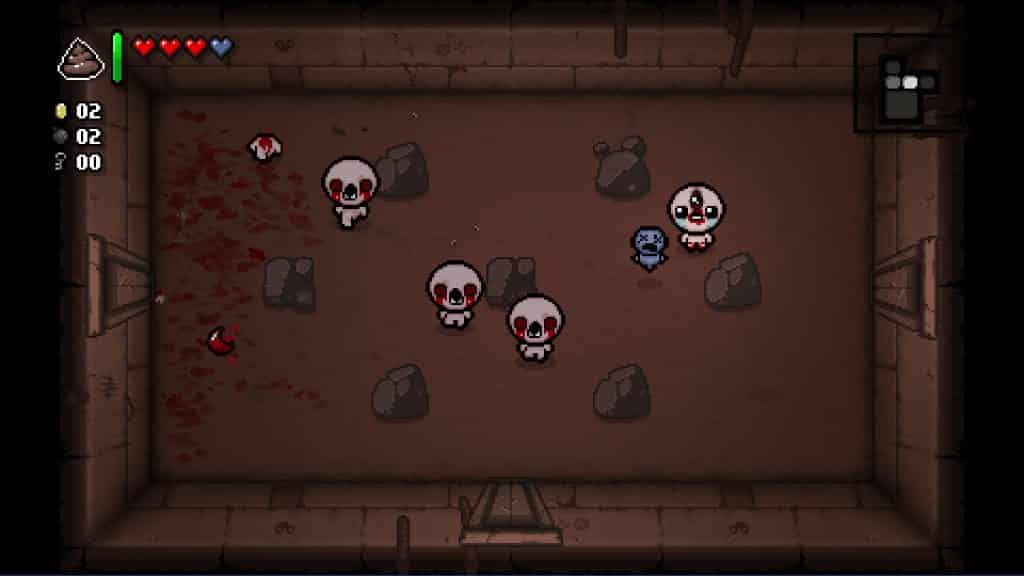 The Binding of Isaac: Rebirth 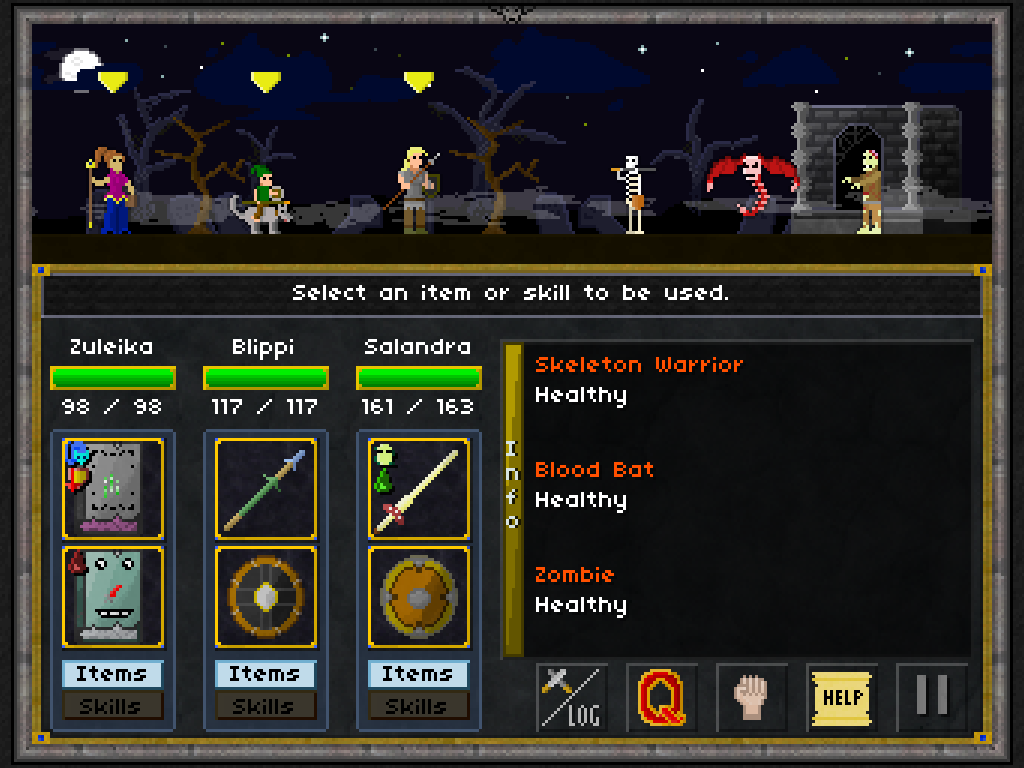 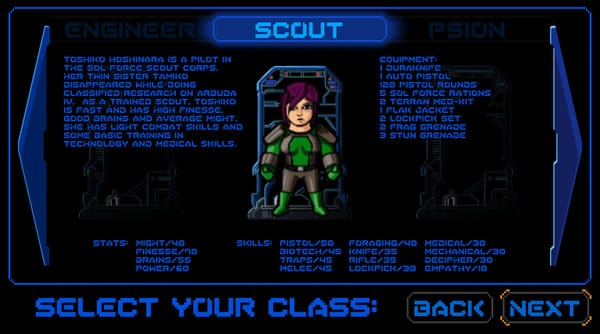 Sword of the Stars (Note: Most prefer the original over the sequel.) 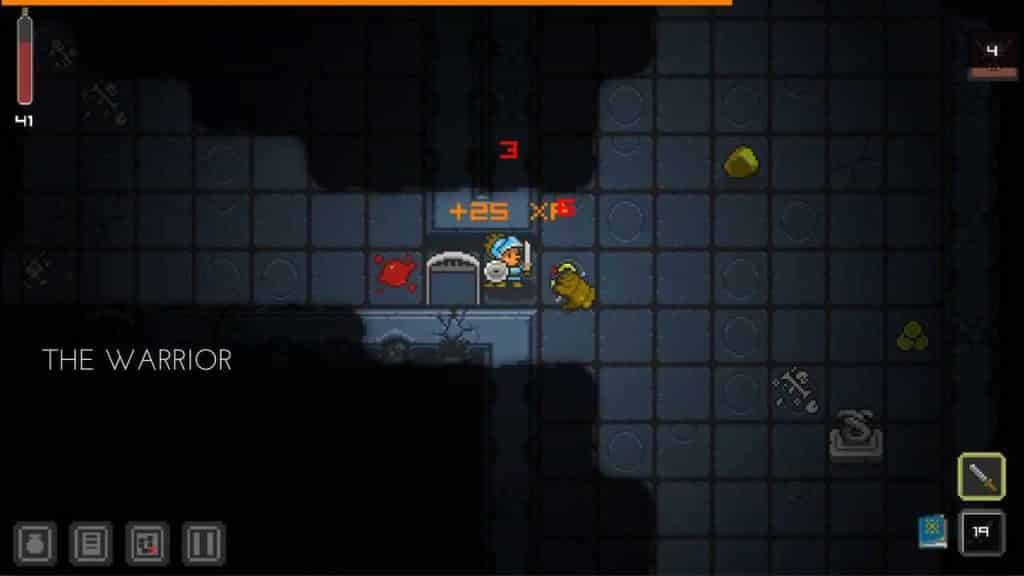 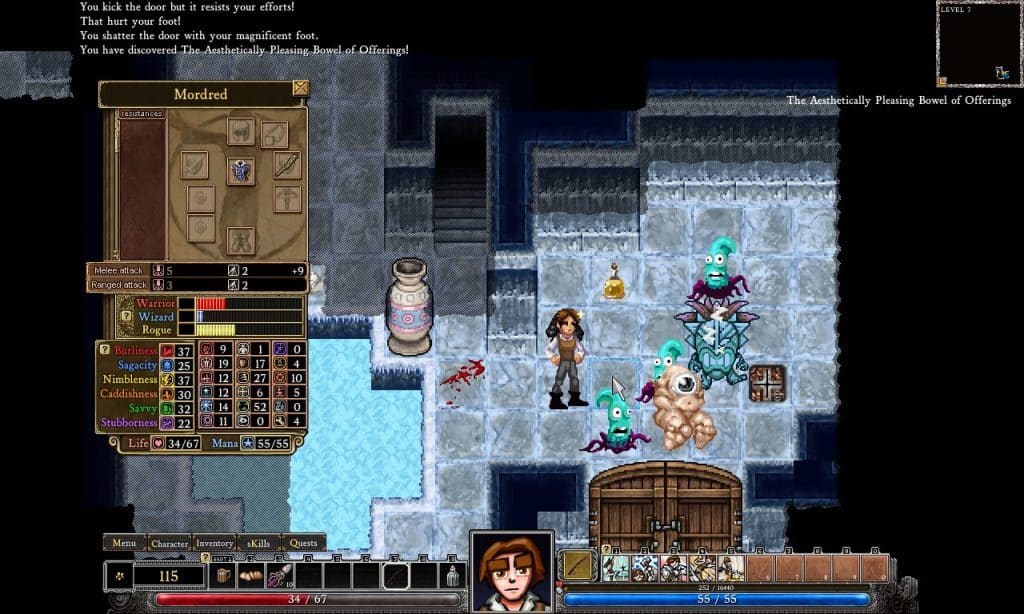 Did we miss out any tough strategy games like Darkest Dungeon? Let us know in the comments section! We’ll add them to this list.