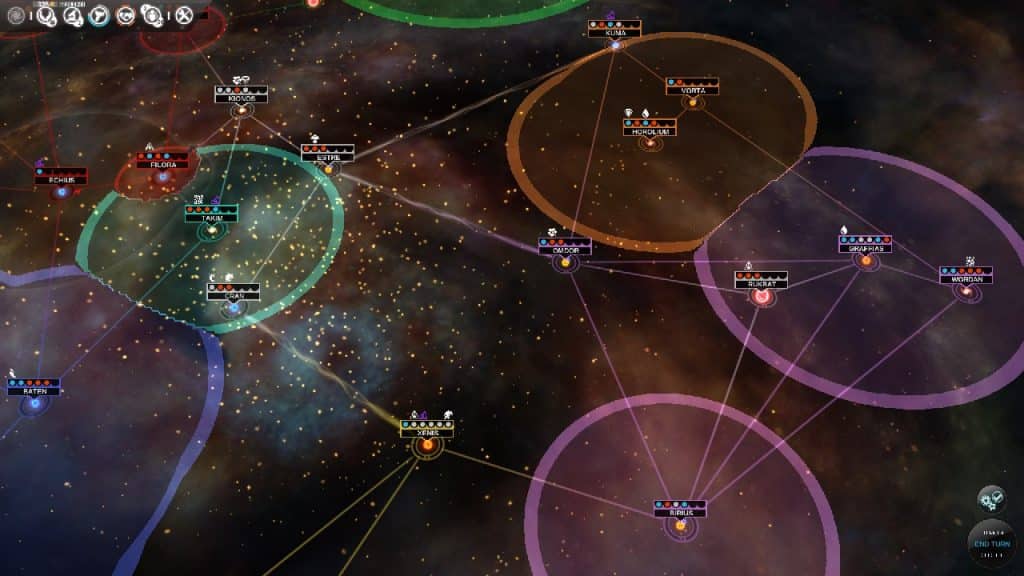 From the creators of Endless Legend, Endless Space invites you to pick one of eight civilizations that you’ll guide towards galactic domination. A whooping seven different victory conditions are available, including your usual diplomatic or war routes. In addition, this epic ‘space opera’ is absolutely gorgeous to look at with stunning character designs, effects, and an appealing color palette.

The combat system is far more robust than most other best 4X games like Civilization 6. Battles are quasi-real-time, akin to a game of rock-paper-scissors. There are three engagement stages (long, medium, and melee) that play on the strengths and weaknesses of your varied ships. Each of your individual fleets can also be tweaked with custom ship modules, engines, mods, and so on. The parts you choose will have a big impact on how your battles play out.

Overall, Endless Space holds its own among the very best 4X games like Civilization 6. It is also worth noting that Endless Space 2 is currently available for Early Access. However, you may want to hold off on buying the sequel until the major bugs are fixed. 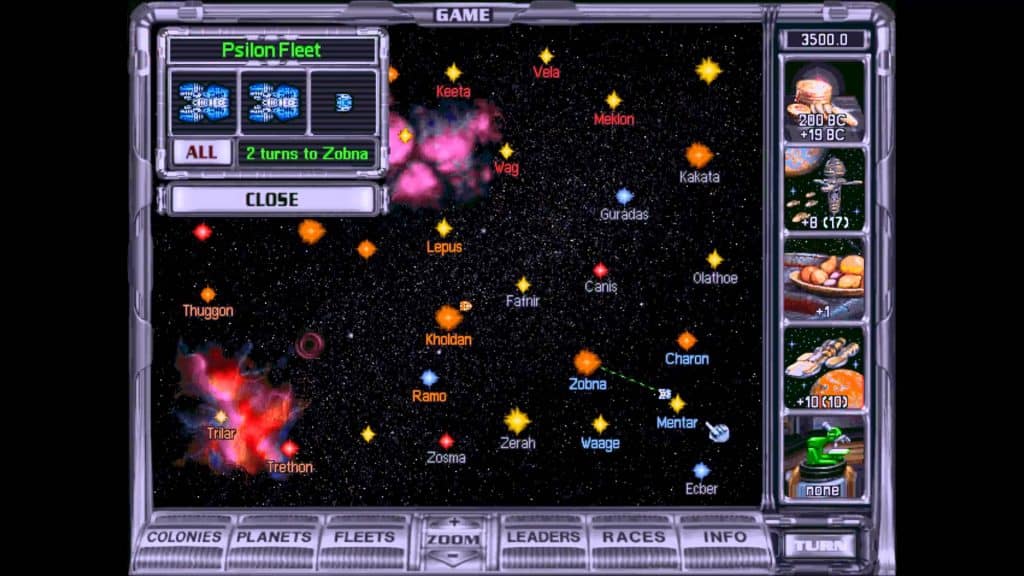 The original Master of Orion remains a 4X classic after two plus decades. In fact, the term ‘4X’ itself was first coined by Alan Emrich in his early preview of this game. Little surprise, since MoO is credited for setting many of the gameplay standards that now define the subgenre.

As you’d expect, MoO features lots of space exploring, resource gathering, battle management, and civilizational expansions. Being an old DOS game, you won’t see flashy graphics or special effects. However, don’t be fooled: the basic gameplay is as immersive as many of the best 4X games like Civilization 6 you see today. You’ll be hit with ‘one-more-turn’ addiction as you strive for the perfect balance of finances, diplomacy, and military force.

Master of Orion 2 builds on many of the original’s strengths while offering new micromanagement options. You’ll have more control over your population and military operations. In addition, maps are even larger thanks to a greater number of multi-planet systems. However, fans are admittedly still divided on which is the better game. People who prefer the first enjoy the streamlined battles and strategies. Those who love the follow-up praise it for its higher level of customization. Both games are still actively supported by excellent modding communities.

By contrast, Master of Orion 3 has been widely criticized for its unwieldy interface and oddly missing features. You might also want to avoid the recent Master of Orion reboot. Even with better graphics, many (but not all) fans pan the game for ‘dumbing down’ the in-depth 4X mechanics that made the first two so great. Moreover, a lot of minor bugs have yet to be fixed. For now, we suggest you stick to 1 & 2 which, while dated, remain two of the best 4X games like Civilization 6 ever released.

Read more honest player reviews of Master of Orion 1 and 2. 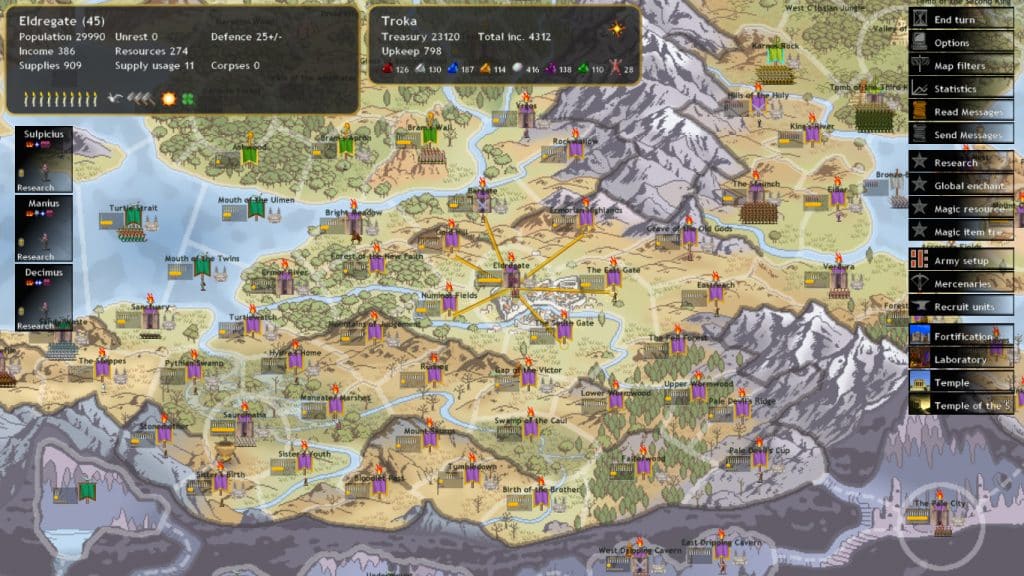 A lot of the best 4X games like Civilization 6 toy around with the idea of religion. However, Dominions 4 is unique in that it lets you play as a Pretender God presiding over a civilization. Your main task is to use your omnipotent powers to convince your population to respect your authoritttyyyy (cue Cartman). At the start, you decide what kind of God you want to be, all with varied strengths. Will you be a powerful archmage or maybe a mammoth titan? In addition, you’ll create your very own spells, monsters, and nations, among other fun customisations. Victory is also achieved in a few ways, including capturing surrounding lands, destroying your enemies, or simply acquiring the Thrones of Ascension.

Unlike most games like Civilization, Dominions 4 is heavily inspired by Roman, Aztec, Greek, and Israelite lore, to name but a few unique resources. This helps the game stand out from other fantasy 4X titles, since you won’t be dealing much with your typical elves and orcs. In short, you’ll find Dominion 4’s themes and tone to be a breath of fresh air, even if the graphics are a bit dated.

Dominions 4 still enjoys frequent content updates and fixes despite being released a few years back. The modding community for this game is also very active, thanks to patches that come with enhanced editing toolkits. Overall, this is a title definitely worth your time if you’re in search of the best 4X games like Civilization 6. 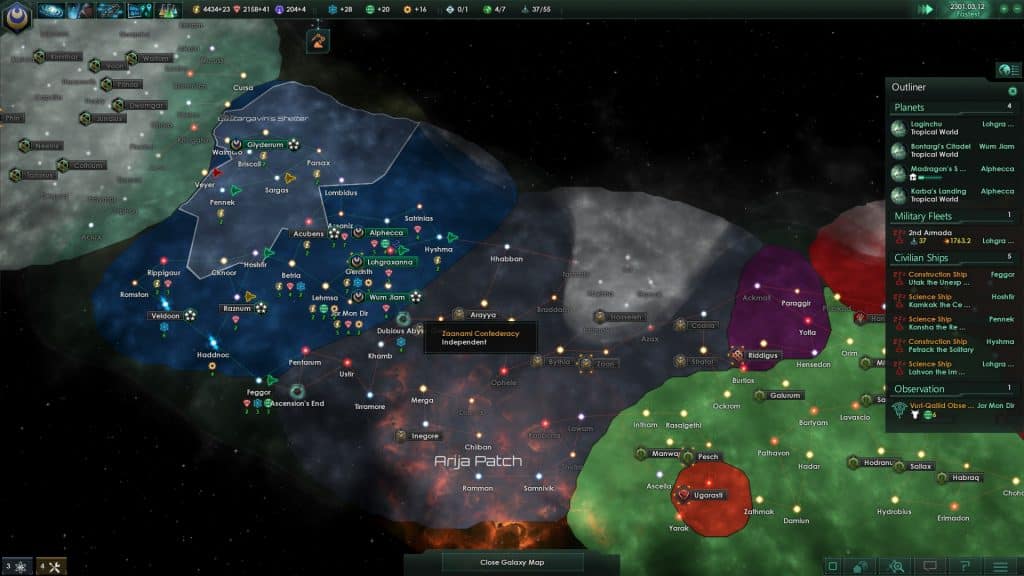 Some consider Stellaris to be a ‘grand strategy’ game – though many see it as an original kind of 4X hybrid. Whichever way you cut it, this is a game not to be missed by any Civilization fan. Set to a strong sci-fi theme, you take control of an alien (or human) race seeking to explore a cosmos teeming with interstellar life. How you choose to interact with them is of course up to you.

One of Stellaris’ standout features is its in-depth diplomatic system that is much more fleshed out than other best 4X games like Civilization 6. You can pursue a vast range of relationship options, including forming ‘non-aggressive pacts’, ‘defensive pacts’, ‘trade agreements’, ‘federations’, and many more. If that bores you, you could simply opt to destroy your enemies by rushing for resources and upgrading your military tech as quickly as possible. However, it is worth mentioning that Stellaris is a bit less combat-focused compared to, say, Oriental Empires or Endless Legend – although the system in place is well-implemented.

Upon initial release, Stellaris’ developers were faced with the awkward situation of having to clamp down on a number of user-made ‘racist’ mods. Thankfully, much of this controversy has cleared up, and there are now a slew of high-quality mods available. These enable you to tweak anything from game balance to spaceship designs. All in all, Stellaris‘ incredible value-for-money makes it one of the best 4X games like Civilization 6 available today. 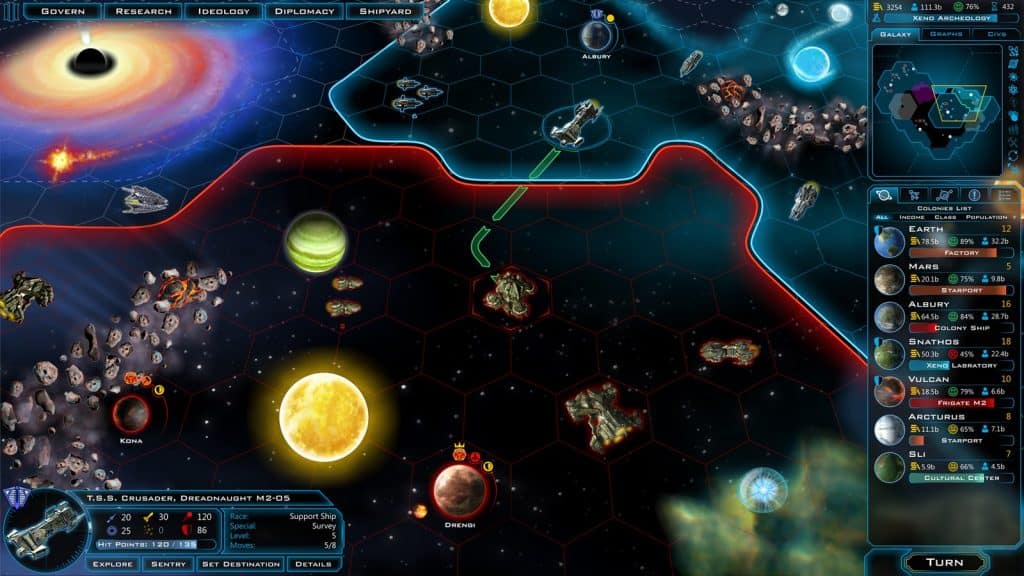 What is it about space and 4X games that gels so well? Similar to other sci-fi games on this list, Galactic Civilizations III puts you in control of the Terran Alliance (or other civilizations) in a quest to conquer the furthest reaches of the stars. Multiple victory options are also available, covering the usual gauntlet of diplomatic and war routes. In addition, you’re able to customize map sizes, resource and planet densities, event occurrences, among other settings. The game is moreover incredibly large, inviting you to interact with anywhere from sixteen up to a hundred opponents.

Admittedly, not everyone is a fan. A few folks actually find this game to be a bit boring. However, Galactic Civilizations III has received generally favorable reviews, with many giving extra praise for its exceptional ship customization options, massive technology trees, and overall good interface. Patches are also regularly released with new mods always in the works. In short, Galactic Civilizations III has the potential to be one of the best 4X games like Civilization 6 – albeit with a few tiny tweaks needed.

Here are a few other best 4X games worth playing. Keep in mind that a few of these blend traditional 4X elements with other genres, making for interesting hybrids. Thus, they may not check off all the boxes of our selection criteria. Either way, they’re all worth looking into!

Sins of a Solar Empire

Did we miss out any more best 4X games like Civilization 6? Share your thoughts in the comments section below and we’ll add your suggestions in!