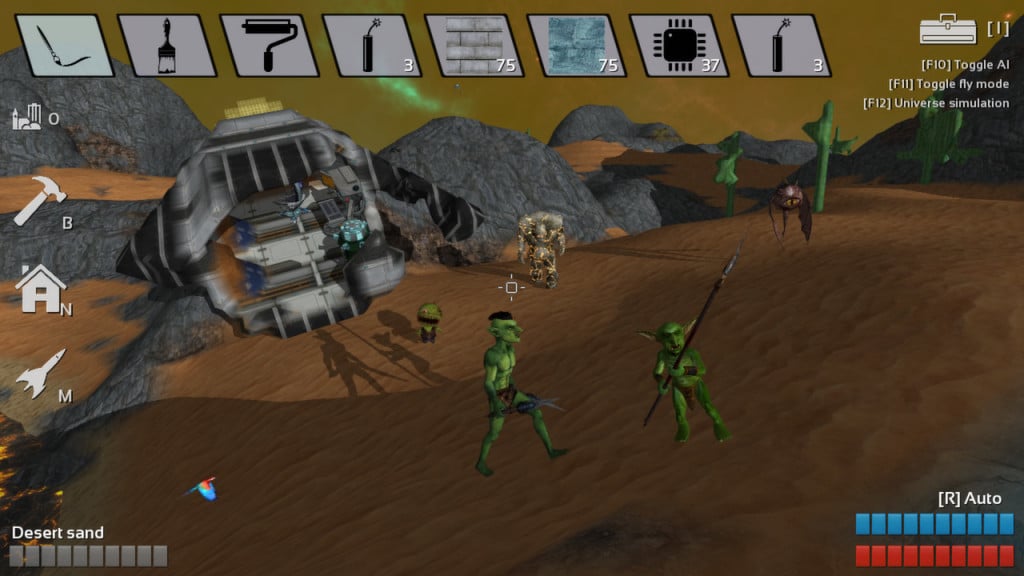 So you liked the idea of No Man’s Sky but aren’t too happy with how that turned out? You might be better off just sinking your teeth into Masterspace. It’s one of a few sandbox games like Minecraft, only with an infinite number of planets to fly to and explore rather than just one. While graphically unimpressive, there is so much to do in Masterspace that the fidelity of the visuals is easy to forgive. Masterspace also goes well beyond the crafting of primitive tools and weapons like in Minecraft. You’ll be crafting lasers and space canons instead. However, be warned that the first half of the game plays much better than the second, and improvements seem to have slowed down to a trickle. 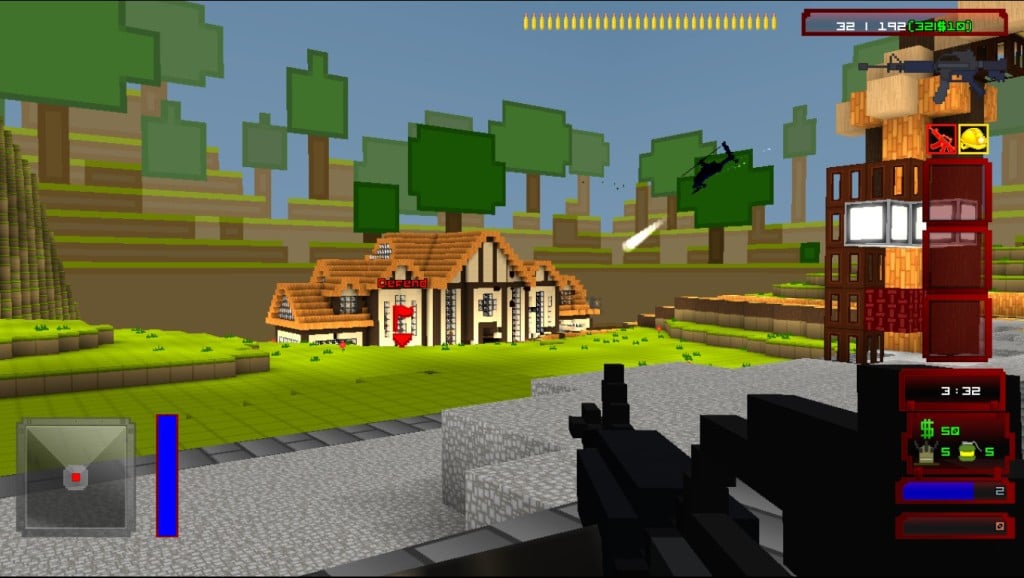 Hey, ever played Call of Duty and wished to yourself, “Gee, if only this game was more like Minecraft!” No?! Well, you might have if you knew about Guncraft! It combines the visual art style of Minecraft with shooter gameplay mechanics. And just to keep up with the spirit of Minecraft, you can also build yourself make-shift shelters in the middle of heated battle. Overall, Guncraft is just about what you’d expect if two crazed game developers played a little game of “what if” between Mountain Dew and Pizza Hut. In a good way. 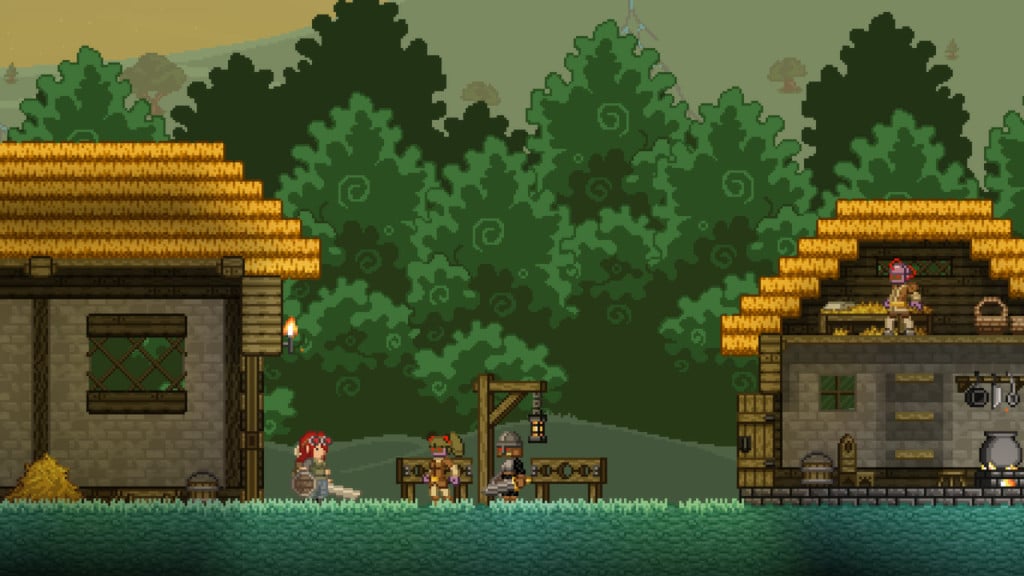 Fan of games like Minecraft and Terraria will find a lot to like in Starbound. “Survive, discover, explore, and fight” is the game’s tagline, which you could also easily put in front of Minecraft and no one would bat their eyes. If it’s the journey you’re after, Starbound is your game. It features a vast 2D universe brimming with expansive exploration possibilities as you collect items and materials to make new items and new materials. There are even quests and NPCs to give you directions if you find yourself lost. 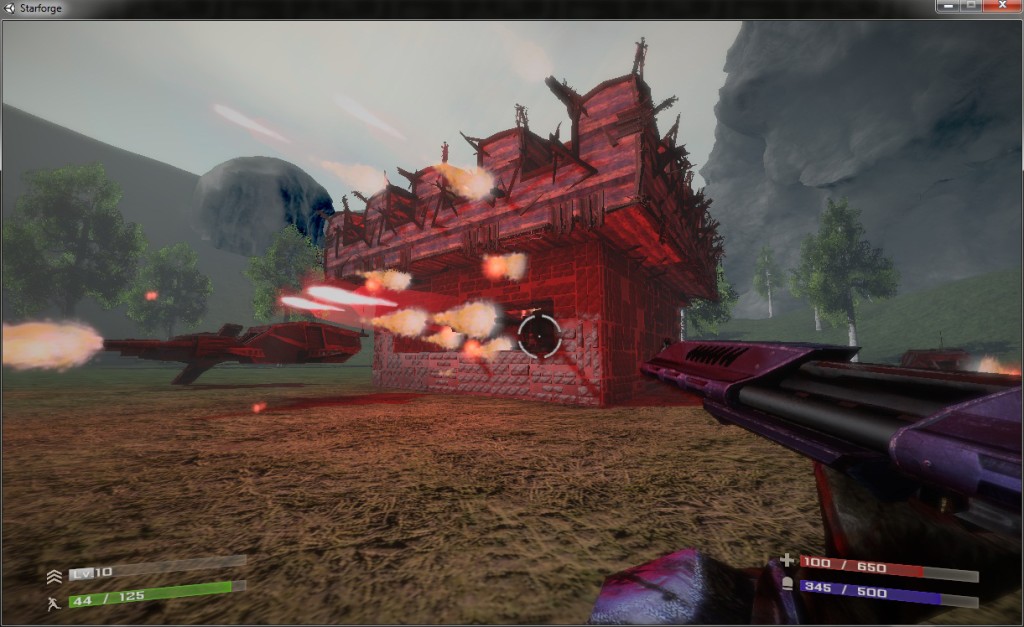 StarForge will instantly stand out among the most graphically polished sandbox building games like Minecraft. Equal parts Minecraft and Destiny, this game will have you taking on the roles of both fighter and builder. It’s rapidly gaining popularity in the PC gaming community, and it’s easy to see why. There is a deep base construction and crafting mechanism, and surprisingly tight shooting mechanics for a game with such a modest budget. And this is just the beginning, as StarForge’s developers have promised RPG elements to come in future updates of the game. 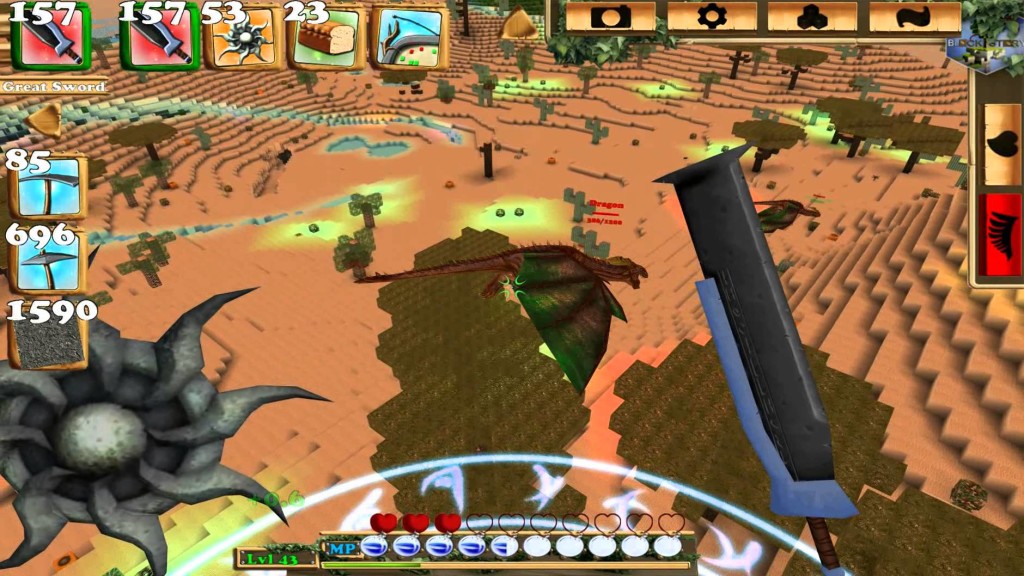 Minecraft with dragons? Just show me where to sign up! Block Story is one of many sandbox building games like Minecraft in just about every conceivable way… except that it introduces everyone’s favorite scaley mythical creatures! This can’t possibly be a bad thing. Don’t be fooled though, you aren’t Khaleesi and these dragons aren’t your friends. They will scorch the earth and eat you up like a bowl of peanut M&Ms. Block Story is also available on iOS and Android for you cross-players out there.

Honorable Mentions (More Games Like Minecraft Worth Checking Out!)

We admit we weren’t big fans of Castle Story at first. There were too many bugs and the developers were taking too long to fix them. However, the good news is things seem to be picking up for this voxel Minecraft-like game. Patches are being released quicker and a few newer positive reviews are coming in. Sure, it’s still far from perfect. But there’s just something really fun about building sprawling castles and placing traps to gore your invaders to death. Keep your eye out on this promising sandbox title!

Games like Minecraft are fairly common on the iOS. Block Fortress is one of the better ones. This unique game combines elements of tower defense, first-person shooting, and sandbox creation into one fun hybrid. Like Minecraft, you’ll also be building stuff to block out invaders from messing up your crib (and you). What you create is limited only by your imagination! In addition, there are actually quite a few weapons to try out. Definitely worth your time.

Admittedly, Planet Explorers is a bit pricier than some other games like Minecraft on this list. But it more than makes up for it with the sheer sandbox fun it offers. The game is set in the year 2287 on the distant planet of Maria. During a landing sequence, disaster strikes, and you’re soon left to fend for yourself on the hostile land. You’re spend much of your time digging, crafting, mining, and the works. In addition, there’s a really fun vehicle and weapon creation system that’ll keep you occupied for hours on end. Planet Explorers also has a pretty fleshed out Story Mode on top of the usual Build and Co-Op.

We shan’t call Minetest a blatant rip-off of Minecraft. Instead, let’s refer to it as an “awesome FREE version of Minecraft, when it was in beta”, shall we? Seriously, though, the game does a commendable job at including most of Minecraft’s features. You’ll mine, craft, and build all sorts of wonderful buildings in no time. It also runs perfectly on older computers, thanks to its less resource-intensive graphics. Even more impressive, Minetest is largely being coded and developed by one person. Not too different from the early days of Minecraft, really. This is definitely one of the better games like Minecraft available today. And did we already mention it’s free? So, really, you’ve got nothing to lose… except hours of sleep.

Epic Inventor is yet another free-to-play game similar to Minecraft that feeds into our itch to create things. The game technically shares more in common with Terraria, combining side-scrolling with RPG elements to great effect. You’ll be building up your city while defending them against attacks with traps and other gizmos. Resource generating buildings can also help alleviate the burden of constantly mining for resources. Moreover, there’s a great development team behind the game, meaning patches and bug fixes are always regular. Keep a lookout for Epic Inventor 2 as well. We anticipate it to be one of the best games like Minecraft that’s set to be released real soon!

The newly released Dragon Quest Builders combines the series’ classic RPG elements with new Minecraft-like features. You’ll harvest resources, construct contraptions, and build weapons / armor for much of the game. Graphics are simple but endearing, with the story straddling the lines between ‘kid-friendly’ and ‘adult’. This game is a standout among games like Minecraft.

Also Worth Looking Into:

Ace of Spades : This game USED to be one of the best games like Minecraft available. However, the development team seem to have all but abandoned this project. Nonetheless, AoS is still worth checking out if only for its hybridized action / shooting / sandbox gameplay.

Cubic Castles : This is what you’d get if Minecraft had babies with a cutesy MMO like, say, Amazing World. It’s a unique mixture of the best Minecraft creation elements, topped with tons of character customizations such as outfits and other cute accessories. Not exactly a staple when it comes to games like Minecraft, but it’s no slouch in the fun department either. And, hey, it’s free, so we reckon you should give it at least a whirl!

Did I miss out any sandbox building games like Minecraft? Feel free to share your thoughts below! Don’t forget to also check our our post on Real-Life Rooms Inspired by Video Games, which include Minecraft themed decors!