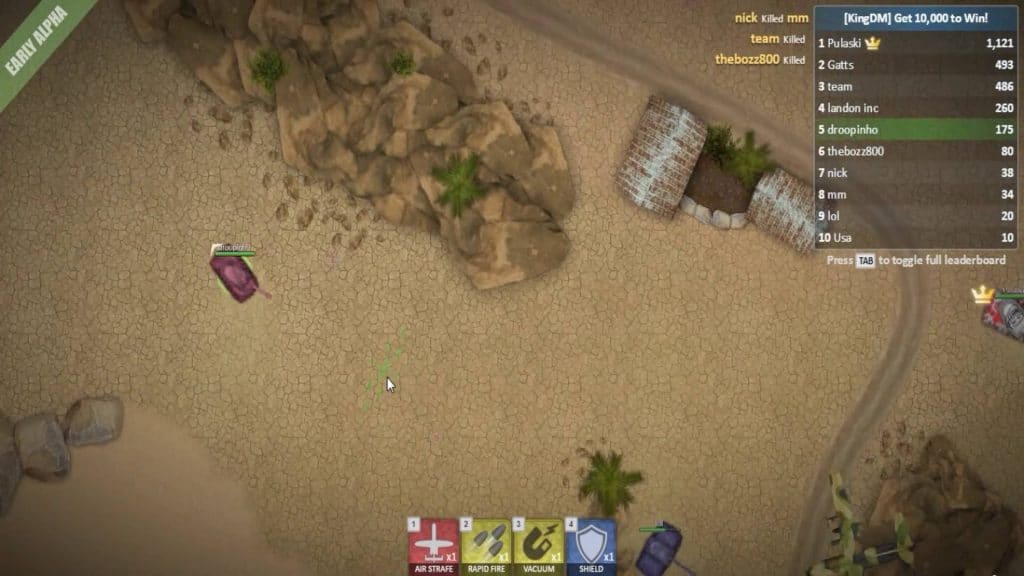 TankWars.io sees you controlling a literal tank, not just a generic geometric shape. You crawl over surprisingly detailed terrains (for an .io game), firing guns, canons, and missiles at everyone in true Diep.io-like fashion. There are numerous power-ups to collect that’ll unlock various perks and upgrades. Like Diep.io’s default setting, both the keyboard and mouse are needed to coordinate your movement. Extensive configuration options are available.

A unique aspect of TankWars.io is the numerous special attacks the game offers you. For example, you’re able to call mighty airstrikes against enemies, or even use Vacuums to wipe out your opponents. These are actually enough to turn a losing battle into an epic win.

TankWars.io does get a bit laggy during peak hours. However, the game is still in very early development, so I’m sure such issues will be resolved in time. As it is, TankWars.io is clearly a labour of love, holding its own among the best .io games like Diep.io. 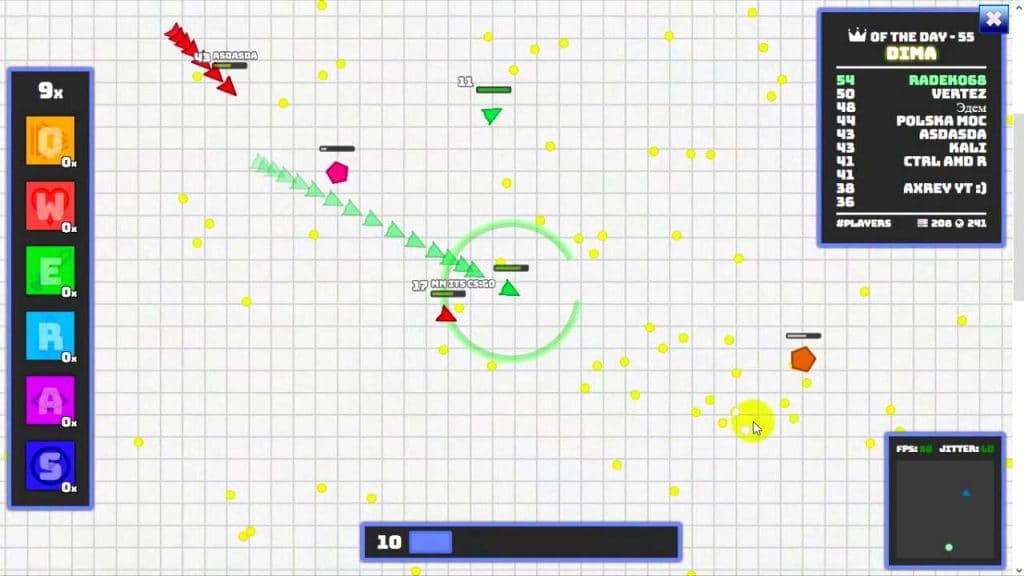 Sl4sh.io combines elements of Slither.io / Agar.io with Diep.io whilst adding in its own little twist. Like Slither.io / Agar.io, you run over random objects to collect points. Then, similar to most games like Diep.io, you spend these on upgrading your HP, damage, speed, and so on as you try to take out other online players. Sl4sh.io also has the same geometric artistic style as both games.

However, what makes Sl4sh.io really distinct is the fact that the projectile weapon you’ll be using here is yourself. That’s right. YOU are the weapon of mass destruction! Every mouse fire basically gives you an extra burst of speed to slash (i.e. sl4sh) and hurt your opponents, like a badass ninja. Getting your aim right takes a while to master – but that’s all part of the fun!

Ultimately, Sl4sh.io sticks to the familiar formula of best .io games like Diep.io whilst daring to do something a little different. For that, it’s the Guns N’ Roses of .io games. Cause, Slash. Geddit?! Okay, never mind. 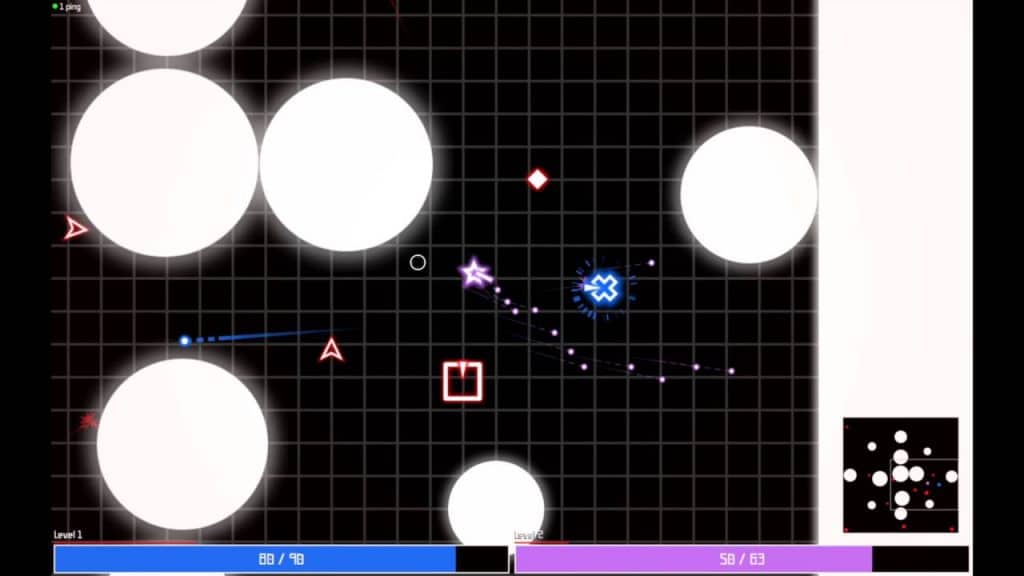 Again, GeoArena Online isn’t strictly an .io game. Nonetheless, it shares enough qualities with Diep.io to warrant inclusion here. In essence, you move a geometric tank around a battlefield using a keyboard and mouse to blast your opponents. There’s also a good assortment of different weapons and ship types that you can freely combine, creating diverse strengths and weaknesses.

However, GeoArena Online does vary from Diep.io in key ways. First, you’re limited to one-on-one matches. So, don’t expect massive battles of any sort. In addition, you only customize your tank before entering a match – not during. Compared to Diep.io, GeoArena Online is much speedier, which will appeal to those wanting quick one, two-minute battles. The game is also themed closer to Gunr.io’s striking futuristic setting rather than Diep.io’s simpler look. There’s also no randomly generated objects to collect.

All in all, GeoArena Online executes what it aims to do really well – rapid matches for tank-lovin’ adrenaline junkies. Definitely worth checking out for those keen on trying Diep.io-like games of a different flavor.

Wings.io is like Diep.io with ADHD – in a good way! You take control of a plane that speeds across the skies. When I say speed, I mean this game moves much, much faster than Diep.io. As such, new Wings.io players will need some time to adjust to the bursting pace of each match. You’ll die really often in Wings.io – but so do most players.

Like Diep.io and Agar.io, you’ll collect scattered objects that’ll give you a variety of weapons including missiles, spread attacks, bombs, railguns, and more. Many of them significantly amp up your projectile firepower though there aren’t any passive skill-trees to level up. Graphically, the game’s cartoony style is very polished and, for the most part, runs smoothly without lag. Aiming and movements are fully mouse controlled. In addition, Wings.io actually encourages ‘revenge attacks’ by highlighting the foe who last killed you.

Wings.io is by far one of the most popular and best .io games like Diep.io. The two share similar traits. However, there’s more than enough gameplay variation to warrant giving Wings.io a go for its own sake. 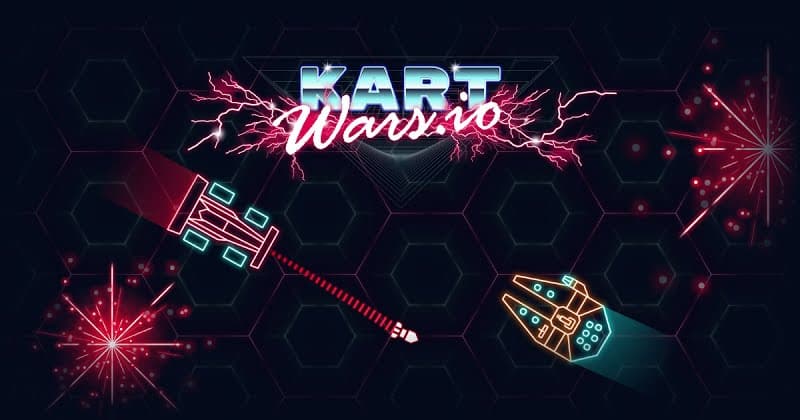 Like Diep.io, KartWars.io plops you in a large multiplayer arena – this time as an ultra-armored kart. You collect glowing energy orbs generated everywhere or dropped from fallen opponents. These give you points. However, unlike Diep.io, you can’t spend them on leveling up. Instead, they’re mostly for bragging rights. Visually, KartWars.io’s retro color palette appears to be inspired by old-skool cartoons of the 70s and early 80s.

As with Diep.io, you’ll use tons of projectile weapons to take out your opponents, thus requiring a good amount of practiced aiming (save for honing missiles). There’s also a whole range of other effective power-ups, including landmines (very useful), static charges, and timed explosions – all accompanied with well-rendered animations.

KartWars.io controls are very flexible. The game lets you choose between various keyboard and mouse combos, similar to Diep.io. Personally, I found the fully mouse option to be the best for easy navigation and shooting.

Even in its early Alpha stage, KartWars.io already deserves to be mentioned alongside the best .io games like Diep.io. This is one addictive game definitely worth picking up.

Navigate an 3D-rendered isometric maze with your tank and take out your enemies! Not as addictive as other games like Diep.io. Still, it provides for some quick-and-easy fun.

An Android app that outright promises the chance to “upgrade your diepio tank”. So, you know what to expect. Good mobile solution for Diep.io addicts! You may also want to check out War.io.– yet another of many games like Diep.io.

Personally, I’m not the biggest fan of Vanar.io. Movements feel a bit chunky and there’s a little too much momentum force for my liking. Nonetheless, this game remains fairly popular among Diep.io fans, even without the customizable upgrades.

I’m sure there are tons more best .io games like Diep.io out there. Did I leave your favorites out? Leave a comment below and I’ll include them in this list.

Don’t forget to also check out GLZ’s lists of games like Agar.io and Slither.io!